Well, people, the transformation is complete. I am officially completely out of it.
There was a time when I had seen all of the movies up for Best Picture at the Oscars. In fact, our best friends used to throw an Oscar party where folks would dress up in costumes reflecting their pick for best film. Now that I consider it, I don’t know that we were any more hip then, but at least we knew enough about movies made in the last year to be able to have an adult conversation about the world. And we could raise that conversation and turn it into a costume.

This year, I have seen NOT EVEN ONE of the movies on the nomination list. I don’t exactly equate movie-watching with good character, but I feel a bit loser-ish that I haven’t seen EVEN ONE. And just to add insult to injury, I’ve seen only one of the animated features. Seriously! I don’t even watch cartoons anymore! 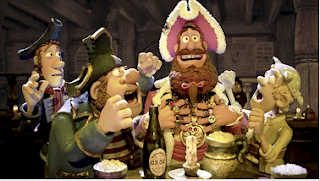 (By the way, who are these ClayMation people? Why are they tossing back the juice in a kids’ movie?)
Marc and I have such good intentions. We TALK about seeing movies, which is kind of like talking about exercising. We want to watch Les Mis, for example, but when we are finally on a date and we have to reacquaint ourselves with our names, our life experiences, our hopes and dreams, blah, blah, blah, we hardly have the energy, time or cash to tack on another three hours of babysitting time to watch people sing and cut their hair.
See what I mean? Total, cynical loser. It’s over. The change is complete.
Where’s my Titanic costume?

Editor’s Note: After hearing my sad story Saturday, Marc rented Argo and we watched it that evening. Wouldn’t you know, that bugger won Best Picture last night?! My efficiency-obsessed husband was so happy! One and done, baby! One movie a year and we happened upon the winner!