Happy Most Uncomfortable Holiday! I try every year to get excited about Halloween and I just can’t muster up the enthusiasm. For one thing, what and who looks good in orange and black? Don’t say that you do because I assure you, you don’t. Your friends just don’t feel like they can be honest with you like I can.

Then there’s the candy. My children would prefer to hook themselves up to a pumpkin-shaped I.V. and just ABSORB candy all day long, so Halloween is a built-in battle of wills. My favorite approach is to let them wallow in it for the two days after tricks and treats and then peel them off the ceiling at the expiration of 48 hours. Also, I steal their candy and eat it when they’re in bed. (I learned this technique from my mother, who sometimes still pilfers my candy out of the drawer where it’s hidden. She has a bit of a sweet tooth.)

There is a bright spot, however, for the Halloween scrouge. The costumes can be lovely. I shake my head distastefully at anything involving ketchup-blood or webs or vampire teeth. Also, boys wearing white and black make-up or girls using trick-or-treat to be code for “skank-o-skank.” You can call me a traditionalist. But some people really don their Clever Hats when it comes to costuming. Take this man, who was inspired by a Chia Pet: Or this man, who was later arrested for trying to cook his child:

Now, here’s an option for those of you think all those cute duckie and sweet pea costumes are so 2009: 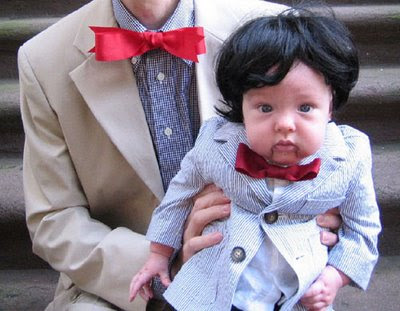 My favorite costume, though, was worn by a friend of Marc’s during grad school. The guy was a bit of a class clown, sported a healthy Midwestern belly, and sure did show up to the Halloween party wearing a lot of tin foil and a big sandwich board sign that said “Mammogram Machine: Place Breast Here.” Not one female at the event took him up on it, but bless you, B.K., wherever you are.

p.s. Am I allowed to be a Christian writer and use the word “breasts” in a blog post? Christians still have breasts, right?