Remember pop music? Yeah, neither do I. But I did watch the Grammy Awards show this year, which made me FEEL like I know pop music. I didn’t exactly recognize 98% of the artists sitting in the crowd in their astonishing fashion choices. I looked for some fashion highlights to post here, but most of the humdingers involved copious amounts of flesh, cleavage, and sequins in questionable places. Trying to keep things PG around here. I should, though, point you toward this man. 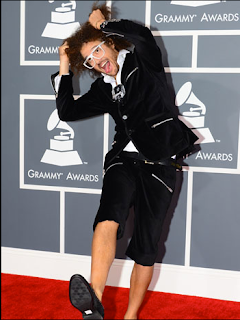 Photo credit.
His name is Red Foo. Much like my name is Red Foo. In other words, we both made up our professional names. But at least I didn’t use Foo. Or Foo-Foo, if you’ve read Stretch Marks. But I digress.
I heard a few songs that were painful, some that were funny without intednding to be, and lots of good stuff. These two are Goyte, the people who got Record of the Year. 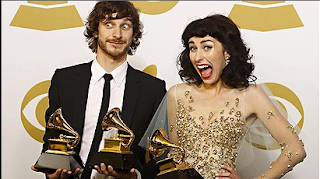 I, for one, was unaware we give awards to Record of the Year. Did you know we do this? One record (record?!) that just jumps to the top of the universe for the entire year? I admire the commitment here. One record, best of the whole year. I can’t ever really choose my favorite song of the AFTERNOON, much less the year. But these people got it. And I like their song. I also liked it when the girl of the group received her award and she fell all over herself in pure, childish joy, not because of the Record of the Universe award, but because Prince was the one who presented it to her. Prince, who is a musical genius but who is also roughly four feet tall plus hair height. It was an awesome moment.
Today is a lovely summer day, and I think we should all acknowledge our hipness and the Record of the Universe by listening to Goyte’s song with the volume turned up. This version is so fantastic. I recommend watching it and then having your children reenact it. Thea likes to be the love-tortured girl, Ana likes to be the male lead who opens his mouth off its hinges when he sings, and Mitch likes to be the guy in a hat who prefers not to look at the camera.
Some people are talented enough to homeschool their children. I give my children the gift of pop-song-recreation. Our children might end up working for yours, but we all know who will be the life of the company Christmas party.

6 thoughts on “Rocking Out”