I’m kind of into baking. I’ve thought a lot about this, though not as much as the thought time I’ve reserved for, say, the shape of my eyebrows or the cowlicks that have stubbornly remained in my hair since junior high. (*Never said I wasn’t shallow.) But I think the reason I love baking is first, because I love to eat things that involve butter and sugar. Second, those things usually make my house smell really good while baking and make me feel victoriously domestic, even if the rest of the house would make Martha Stewart go into catatonic shock. Third, the beginning, middle, and end occur all in one day, unlike the creation of a novel or, for instance, a pregnancy.

A few weeks ago, I made a rhubarb pie. I used lard in the crust, which, in general, is a great thing to do as long as you don’t think about it for more than one teeny second. I cut rhubarb from my mom’s garden because I can’t make things grow that God didn’t originally plant without my intervention. While I was cleaning up the aftermath, I decided to check into how to freeze the extra rhubarb. My grandmother, who is a baker’s baker and who still bakes cookies, bars, pies and cakes each week for herself and Grandpa (NEITHER OF WHOM, INCREDIBLY, HAVE LOVE HANDLES), freezes her rhubarb. I’d been thinking of her all day, particularly since I used her recipe for the pie. Here it is, just in case you think me to be a liar: 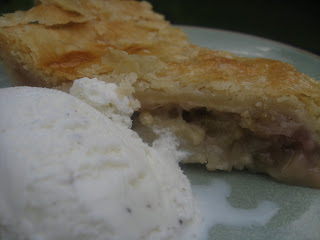 My grandma’s is really, really good. Mine is slowly coming along. I’ve at least figured out how to make it look like a pie and not as much like a preschooler’s sand art project. (Happily, I don’t have photos of THAT stage of my development.) Since my grandma is the pro, I should have called her. Instead, I kept washing dishes that could have waited and asked Marc, who was at the computer, to Google how to freeze rhubarb.

Now here is the glory of the 21st century. Sure, I can hunt around and find what I need in a moment’s notice, be it how to install crown molding, when to feed a baby solid foods, or if Jon Gosselin really does think a divorce is “exciting” because he’s still “really young.” But I can also happen upon entire subcultures of people who know a lot about crazy things, like beekeeping and competitive eating and Peru. Proving this point, when Marc typed in my request, up popped a bunch of helpful links, not on how to freeze rhubarb but how to FREAK DANCE.

I really don’t know what freak dancing is (Marc is worried even as I write this that it is obscene or a lot like the lambada). Perhaps it involves rhubarb. Or beekeeping. For goodness’ sake, don’t Google it. All it know is that in this glorious age of technology and innovation, I will be calling my grandmother the next time I need her help. She loves me, she bakes for me, and she would never, ever show me how to dance, freakishly or otherwise.